Systems Fire protection is our business 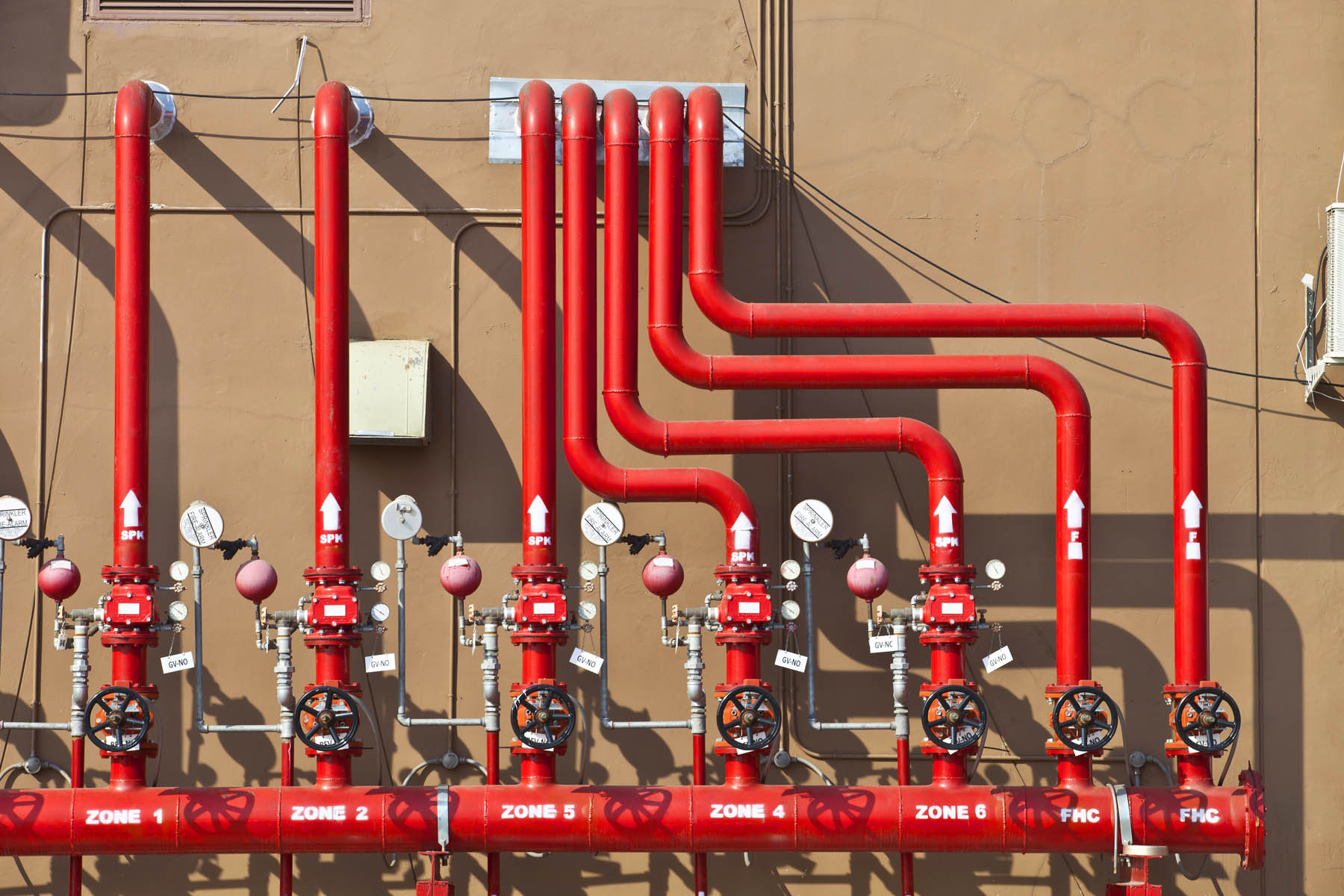 Upon reaching a predetermined temperature rating, a heat detection bulb or fusible link causes the sprinklers to spray water on and in close proximity to the area in which a high heat level is detected, effectively extinguishing and controlling heat release to a confined location and thus preventing the spread of flames. Each sprinkler in a wet-pipe system operates independently, ensuring that only those closest to the fire will activate, simultaneously maximizing water pressure, preventing excess water damage and controlling flames. When modifications are necessary, wet pipe systems are easy to shut down, drain and alter. After sprinklers have gone off, regaining protection is simply a matter of replacing fused sprinklers and turning on the water supply, reducing post-fire downtime. This is a benefit for any type of building especially in environments where space for exhibitions or operations is constantly being rearranged. Malls, government buildings, hotels, and other high-rise establishments are often outfitted with wet pipe systems, although this type of sprinkler system is ideal for practically any environment.

Deluge systems use large amounts of water to douse entire areas in order to prevent the spread of fire in a hazardous location. While they can be located in any room possessing hazardous materials or high ceilings, this type of system is also installed in building openings or paths utilized by personnel to deter flames from spreading. A system of this kind is beneficial to any location where fire may spread quickly, water must be applied through simultaneous sprinkler activation over a sizable hazard immediately, and excessive water will not damage a room's valuable contents. Deluge systems are ideal for rooms containing highly hazardous materials, including flammable liquids, chemicals or explosives. Buildings with high ceilings such as aircraft hangars are also good choices for this type of system since their architecture can make suppressing flames with enough force difficult. Deluge systems are similar to wet pipe systems, except that they use open sprinkler heads and dry pipes that connect directly to a main water supply and their sprinklers do not contain heat-sensing elements. Unlike wet pipe systems, in this type of system, all sprinklers are activated at once, resulting in the "deluge" of its name.

A typical deluge system is comprised of control valves, a detection system and a dedicated main water supply. Since deluge sprinklers do not contain heat-sensing elements, a smoke, heat, or optical flame detector is used to signal the fire alarm panel. Such a device can also be activated manually by a pneumatic or electric fire alarm pull station. When the fire detection device is activated either automatically or manually, it opens the mechanically latched main valve, known as a deluge valve. Once tripped, the valve sends water gushing through the sprinklers, and remains open until manually reset.

Water based systems alone are not always a suitable solution to put out raging fires. Critical manufacturing and fossil fuel processes often involve combustible material and other high hazard items that could spread a large fire to unwanted locations within seconds. This is where foam suppression systems come in place. A system of this kind is useful in locations where fighting fires proves challenging, places such as airport hangars, loading racks, marine vessels and many more. In locations where Class B hydrocarbons and polar solvents are present, foam systems work by separating fuels from the air.

Foam water systems use altered versions of wet, dry, deluge or pre-action systems. They are differentiated from other water based systems by the addition of tanks that hold foam concentrate, proportioners and valves that prevent the concentrate from interacting with the rest of the sprinkler system until activated. The systems works by injecting a foam concentrate mixture into water based system providing a form of blanket for the raging fire.

Proportioners can take the form of bladder tanks, as well as a variety of ratio controllers designed to ensure that the correct amount of foam concentrate is mixed with the water. Firefighting foam is made by mixing 1% - 3% or 6% of concentrate (depending on the type of foam in use) with foam-water mix, then aspirating it to produce fluid foam able to easily cover dangerous liquid substances. The resulting foam is comprised of small bubbles of air, giving it less density than water, oil or gasoline.

Using the right type of foam to fight a specific fire is essential and depends on the nature of the fire. Foam can be chosen for its high expansion, long duration, and vapor suppression characteristics, among others. Both bladder tank and pump water sprinkler systems use proportioners to maintain a sufficient water pressure that also ranges according to foam choice. They then pipe the resulting concentrate to the sprinklers (or other discharge device).

Pre-action systems are similar to wet-pipe systems only that water is not stored in the overhead piping preventing an accidental system discharge. Pre-action sprinkler systems prevent accidental activation by protecting fire hazards from unnecessary contact with water. The sprinklers in this type of system will only emit water if the fire cannot be extinguished by other means. This helps to prevent unnecessary or accidental water discharge, protecting valuable artifacts or expensive technology.

They require a large design space, and are ideal for areas with valuable contents including but not limited to museums, libraries, archives, refrigerated spaces and more. Pre-action systems are a combination of dry, wet and deluge systems that can be divided into single interlock and double interlock systems, depending on your building's specific need.

Single Interlock System
Single interlock pre-action sprinkler systems bear resemblance to dry systems, but also contain a heat or smoke detector that must be activated before water enters the pipes. Similar to the process in a deluge system, a single interlock system utilizes a deluge valve and a supervisory air pressure system. Loss of air in the pipes will only operate an alarm and water will not be released from the pipes until an electric or pneumatic detection is activated.

Double Interlock System
Double interlock systems utilize automatic sprinklers and a pressure switch or pressurized piping that contains monitored, pressurized air or nitrogen. When the air pressure changes or disappears, the piping activates a trouble alarm. In addition to the alarm, a smoke / heat detection system are used to provide an alarm to the central control panel to signal the valve to "open" the water line. Like single interlock systems, a heat or smoke detector must be activated before water enters the pipes. In a double interlock system, however, a sprinkler must also be activated before water flows through the pipes. If either fire detectors or sprinklers are activated by themselves, alone, water will not be released. 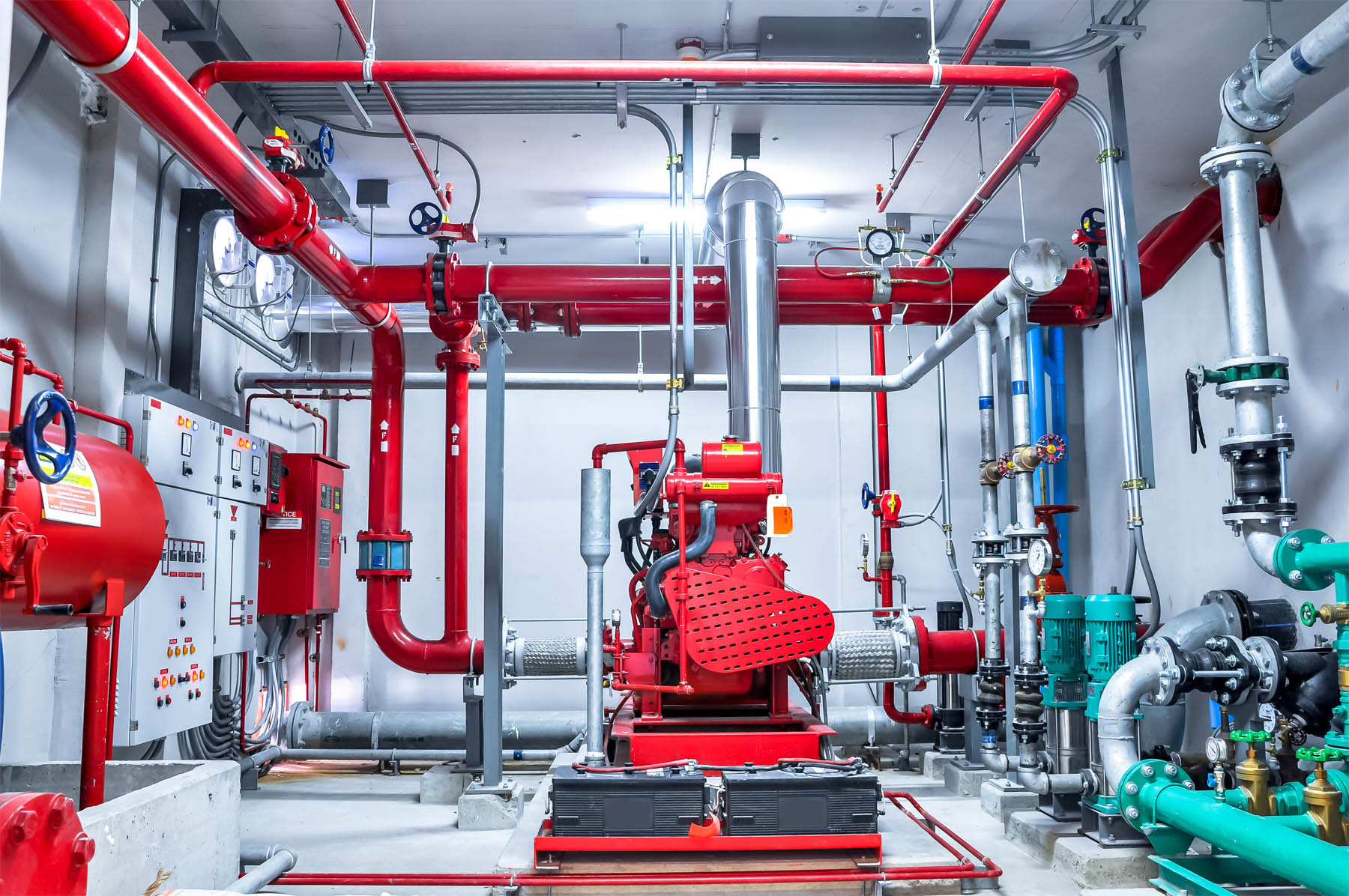 "At Optimal Solution, fire protection is our business!"

Our professional workmanship ensures we follow a strict well-reputed standard for installation.